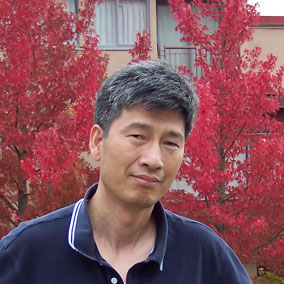 Tongli is a Research Associate in the University of British Columbia’s Department of Forest and Conservation Sciences and Assistant Director of the Centre for Forest Conservation Genetics at the University of British Columbia.  His major research interests include: 1) developing climate models; 2) projecting bioclimate envelopes of ecosystems and species ranges for future climates; 3) building climate response functions for tree populations; and 4) developing a climate-based seed transfer system for BC. Output from these studies are being used for the AdapTree project.

The climate models, ClimateBC and ClimateWNA, downscale and integrate historical and future climate data into one package. They also generate a large number of additional, biologically relevant climate variables. These models have been widely used as essential tools for climate related studies in BC and western North America. The scale-free climate data generated by these models have served as basis for a variety of modeling studies.

Tongli has modeled BC ecosystems and species ranges using climate variables and has projected the shifts in their bioclimate envelopes for future periods. These models are critical for climate change impact assessments and for developing adaptive forest resource management strategies. A powerful machine-learning modeling approach is used to ensure the modeling accuracy. Consensus projections are used to cope with uncertainty associated with multiple climate change scenarios.

The most direct impact of climate change on forest trees is probably the mismatch between the climate that trees have adapted to and the climate that trees are going to experience. A climate-based seed transfer system is expected to be an effective way to overcome this problem. The projected bioclimate envelopes for BC ecosystems are being used as the basis to develop the climate-based seed transfer system to help trees catch up to the climates they have adapted to. For more information, please visit his website.