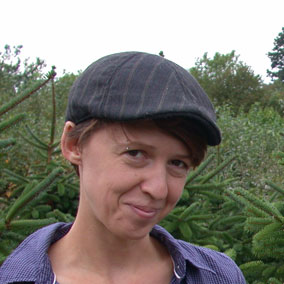 Kay is a Research Associate in the Department of Botany at UBC . She is the bioinformatician for AdapTree. The AdapTree project will be generating sequence data for thousands of loci across thousands of individuals of lodgepole pine and interior spruce. She will be helping to effectively manage, assemble, and analyze this data with the goal of identifying the genomic basis of adaptation to climate in these important tree species.

1) The evolution of plant sexual systems
Stylar polymorphisms are classic examples of morphological adaptation between flowers and their pollinators. Using parentage analysis and variation at microsatellite loci, she demonstrated for the first time in a heterostylous species the existence of asymmetrical mating patterns among the style-morphs. In particular, she found that imperfect sex-organ reciprocity in the wild daffodil Narcissus triandrus results in asymmetrical mating and the evolution of biased style-morph ratios. These features are the consequence of the unusual association between stylar polymorphism and a self-incompatibility system that permits assortative mating in this species. These empirical results agreed with predictions of pollen transfer models and demonstrated that small but functionally significant variation in floral design governs mating patterns among morphs resulting in the evolution of biased morph ratios.

2) Evolution during plant invasion.
Weeds and invasive plants represent a major threat to biodiversity and impose substantial economic damage to the agriculture industry in Canada. In collaboration with Sarah Otto and Loren Rieseberg, she used mathematical models to explore the use of selfish genetic elements as a strategy to control weeds and invasive plants. She also investigated the molecular basis of invasiveness in common ragweed, which is noxious invasive in Europe. Using common garden experiments, transcriptome sequencing, and microarray experiments she found evidence for the evolution of life-history traits during invasion, and was able to identify candidate genes for invasiveness in this species.