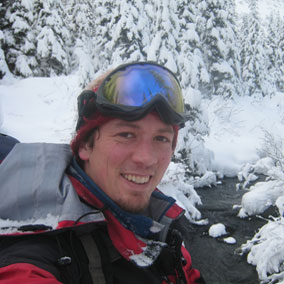 Sam is a Post-doctoral Researcher in the Department of Botany at UBC.  He is working on the bioinformatics and analysis of genomic data for the AdapTree project. His background is mainly in evolutionary genetics, with special focus on how organisms adapt to variable environments. Most forest trees have to contend with environments that can be highly variable in both space and time. Northern populations are colder, southern populations warmer, coastal populations wetter, continental populations drier. He has been very interested in how evolution unfolds in such environments. Lots of evidence shows that populations adapt to their local environments, with differences in how fast they grow, when they begin to prepare for winter, or how they tolerate drought. The challenge now is to understand the genetic basis of these observations. How many genes are involved? Are all genes of similar importance, or do some have very large effects and other very small effects? How are these genes arranged in the genome? Are they clustered together on the chromosome, such that adaptive combinations tend to be inherited together?

The answers to these questions will inform our understanding of evolution in a general sense, and provide us with the knowledge to help inform forestry management decisions in the face of a changing climate. Sam’s role in the AdapTree project is to help process the huge amounts of data that come in from our genome sequencing and analyze the patterns that we find. For other research interests, please visit his website.