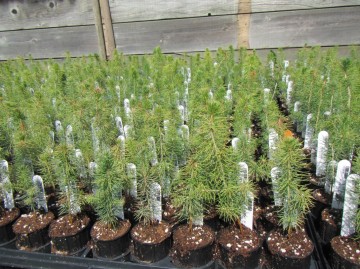 Breeding programs are a major source of seed for reforestation in British Columbia and Alberta. In these programs trees are bred to be more economically valuable. This is done by improving traits such as height growth, stem volume, wood density and bug or disease resistance. Breeding programs, systems of artificial selection, control these characteristics by regulating the mating of parents. This works because qualities we see in plants, animals and people are the result of two things: inherited genes and the surrounding environment. For instance, hair colour is something we inherit from our parents but it may also be lightened by sunlight or affected by our health. By breeding together trees with desirable traits, seed orchards influence the inherited gene part of these attributes and produce seedlings with increased economic value.

When breeders select for traits this way they sometimes inadvertently influence others as well. This unintentional selection can have negative consequences. For example if trees are bred for height and volume alone wood density declines, which reduces its quality. As part of the AdapTree project we are studying if artificial selection on economically important traits has an effect on local adaptation.

Natural selection can result in tree populations becoming adapted to their local climate. This means tree populations are better suited to deal with climate conditions from where they originate and are less suited to other conditions. Local adaptation strongly influences seed transfer guidelines in BC and AB that determine where seed and seedlings can be planted. 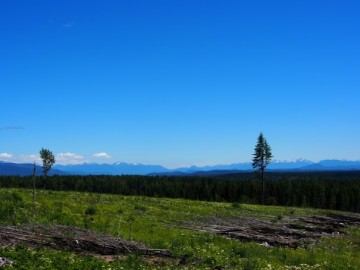 With the threat of climate change, locally adapted tree populations may be in danger of becoming maladapted to their surroundings. If climate changes too fast trees may have a difficult time keeping up with changing conditions and may face high mortality. Trees have historically survived climate change through adaptation and migration. Adaptation to different climates is possible as even locally adapted populations of trees carry genetic diversity. This genetic diversity is important to adaptation because if climate conditions change, genes that are favourable in the new climate may exist within the population. At AdapTree, we examined the effect of breeding programs on current local adaptation as well as potential for future adaptation.

To identify differences in local adaptation between breeding programs and natural populations, over 6000 seedlings of both lodgepole pine and interior spruce were grown at UBC. Half of these seedlings are planted in raised beds on UBC campus, and half are at a site in interior BC. Seed for these trials was received from over 250 natural seedlots and over 20 seed orchards for each species.

We compared bud set, cold hardiness and height growth – all traits that have been shown to relate to local adaptation – between trees grown from natural populations and those from seed orchards. With this information we can see the effect that breeding programs has had on climate adaptation. We are also using genomic methods to determine the genetic diversity of climate related traits in each population. This will allow us to determine if there is a difference between the seed orchards’ and natural populations’ ability to adapt to new climates.

Ultimately the results of this study will help AdapTree develop recommendations for seed transfer policy in BC and AB. These experiments will help ascertain if seed or seedlings from breeding programs and those from natural populations require different transfer guidelines.