Tens of thousands of people are employed in forestry in BC and Alberta generating billions of dollars in combined revenue and taxes. Forests also provide many ecosystem services that society has access to with little to no cost. However, a changing climate may create a mismatch between locally adapted tree populations and their environment, ultimately threatening the ability of forests to provide ecological, economic and cultural services. In fact, climate change has already had negative impacts on our forests in the form of increasing severity of insect and disease outbreaks, such as the recent mountain pine beetle epidemic.

The tree species that constitute our forests exist naturally across wide geographic ranges with encompassing diverse environments. Through natural selection, this variation in environment has resulted in local adaptation, creating populations that differ genetically in different parts of a species’ range. Adaptation and migration are slow processes for trees compared to other forms of life due to their relatively late age of sexual maturity, slow generation lengths and short dispersal distances. The rapid speed of current and predicted future climate change suggests that trees may not be capable of adjusting by adapting or migrating as they have done in the past. This problem is further complicated by the potential for novel combinations of climatic factors to emerge in parts of BC and Alberta.

Interior spruce and lodgepole pine are two economically-important species with over 100 million seedlings planted annually in BC and Alberta. Historically, the trusted source of seed for planting has been local, dictated by provincially regulated seed transfer guidelines to ensure seedlings are adapted to local conditions. This may no longer be the ideal policy given rapid climate change, and changes to long-term management are vital for effective forestry operations. 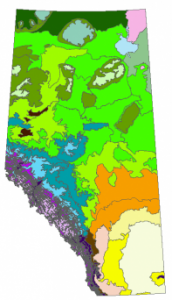 AdapTree aims to improve seed transfer guidelines and forest management response to climate change. Our research includes studying the genome of lodgepole pine and interior spruce. Thousands of seedlings have been grown from seed collected in hundreds of natural populations experiencing various climatic conditions to measure their responses to differing climates. Genes are being identified that underlie specific adaptive traits or that are found associated with certain climatic conditions to discover which parts of genetic variation are relevant to climate adaptation. The identification of these genetic markers will allow us to compare the adaptive potential of natural population and seed orchard seedlots to current and projected future climatic conditions.

Socioeconomic research has also been done alongside the genomic investigation. Assessment of perceptions and values of stakeholders and the general public is taking place through a series of surveys, focus groups and case studies. This socioeconomic inquiry is accompanied by a review and analysis of current policy to determine potential barriers to implementation.

Recommendations for climate-based seed transfer will be developed from our findings with the purpose of decreasing the risk of maladaptation of tree populations to local climates. The policy changes proposed by this project will lessen the effect of climate change on our forests, improve our forests long term health and have a positive impact on the economic, ecological and cultural benefits received from our forests.