Variety is the Spruce (and Pine) of Life

We often describe one another by a series of traits. You or I could be described by our height, body shape, eye or hair colour. The same is done with trees although some of the traits are different, we may describe trees by leaf shape or bark thickness. In tree species that live across large distances and different climates, it is not uncommon for populations to adapt to the local climate.

Local adaptation can mean many different things. Trees may be better suited to deal with cold in the north or heat in the south, more snowfall near mountain tops or drought in valleys. Local adaptation gives trees a better chance of survival and higher fitness in their associated climate. However, this means that they may not fare as well in other locations even those within the species’ range. As climate changes trees may become maladapted to their local climate. 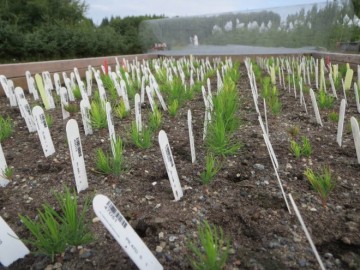 The traits that we see in each other and trees are the result of both inherited genes and the surrounding environment. How tall you are is based on a combination of genes you inherit from your parents and external conditions like nutrition. Proper understanding of how these two factors impact each trait is important to predicting how trees will react to rapid climate change and if they can adapt. To further our understanding of these traits we conducted several common garden experiments.

As part of the AdapTree project we conducted common garden experiments in growth chambers. Growth chambers are enclosures that allow you to set environmental conditions in which to grow plants. A complex model was developed for the growth chambers that included temperature and moisture regimes, as well as simulated drought, frost and winter conditions. Four environments were imitated in growth chambers: central interior BC, southern interior BC and both wet and dry conditions in south eastern Washington. These locations were chosen because they either represent conditions across the species’ range or are similar to predicted future conditions based on climate change modelling. Thousands of seedlings were also planted in gardens at the UBC Vancouver campus and at a site in interior BC.

The results of these experiments will allow us to predict tree populations’ ability to adapt. By knowing the plasticity of traits, we will know how 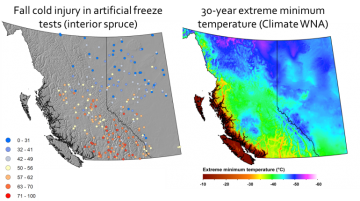 well populations can withstand climate change in their current genetic state. This will also allow us to see if populations include enough variation to survive, adapt and change to match future conditions. This map** shows a comparison of cold injury, we can see there is less injury in the north where the populations are adapted to colder climates.

Ultimately this information will influence our recommendations for seed transfer policy in BC and Alberta. Finding that tree populations do not carry the genetic diversity required to adapt to future conditions may result in the recommendation of assisted migration. In assisted migration locally adapted trees are planted in areas where their local adaptations match predicted future conditions. For instance seedlings from drought and heat resistant southern populations may be planted further north than they currently exist to match warming conditions and increasing drought stress.