Foresters have long known that species with widespread distributions tend to be adapted to their local climates. This local adaptation is often highly heritable, meaning that it can be passed from parents to offspring. This has been demonstrated using provenance trials, where seeds from multiple populations are planted in different common gardens to assess their growth under a range of climates. These large experiments typically show that seeds planted in a garden far from their location of origin will grow poorly compared to seeds collected close to the garden. While these experiments show there is a strong genetic basis to climate adaptation, because offspring resemble parents, we do not fully understand which genes control these traits and how they differ among populations.

The AdapTree project has been tackling this question by conducting large scale genome sequencing of lodgepole pine and interior spruce (white spruce, Engelmann spruce, and their hybrids) collected from across their ranges in British Columbia and Alberta. Due to the large scope of this project, we relied on over ZZ forestry companies and the BC Ministry of Forests, Lands, and Resource operations, to help us by donating seed, which came from a total of 288 (pine) or 258 (spruce) populations.

Seeds were grown under controlled clima 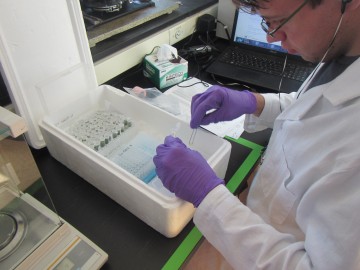 te conditions to allow examination of a range of growth and stress resistance characteristics, and were then sampled for sequencing. The genomes, the entire collection of all genetic material in an organism, of conifers are enormous, more than 6 times the size of humans. To deal with the large amount of genomic data we used a technique called ‘targeted sequence capture’ to focus our efforts on regions of interest, including over 23,000 genes in each species. While we sequenced over 50,000,000 base pairs of the genome from over 600 individuals, this still represents only 0.25% of the genome, which gives an indication of the value of targeted sequencing and the massive sizes of conifer genomes.

We are now going through the fascinating process of searching these datasets for patterns indicating which genes might be involved in local adaptation, and how they differ from one population to another. One of the ways that we do this is by searching for associations between various climate variables and places where the genetic code differs among individuals by a single base pair change (called single nucleotide polymorphisms, or SNPs).If we see that a certain SNP variant tends to be strongly associated with cold or with drought, then we have one line of evidence that it might be important for adaptation.

A second approach is to search for associations between SNPs and the growth and stress response characteristics that we measured in the common gardens. If we find that a given SNP is associated with both a climatic variable and a characteristic, then we have stronger evidence that it may be important for adaptation. This data will help us map that genomic basis of the local adaptation that is critical to the productivity of the forests of Western Canada. Understanding how genetic variants affect growth in different climates will help breeders evaluate and refine their practices in anticipation of the climatic changes expected in the coming century.